Tourism offers you the opportunity to meet with beauty from other places, traditions, languages and even eating habits. Sometimes you need a strong stomach and you have to keep all concerns away to try some bizarre foods around the world.

Most of us eat the same foods every day, but every now and then there is an opportunity to try something really exciting. There is nothing to beat by trying a new dish abroad and discovering a favorite meal that you never knew existed. 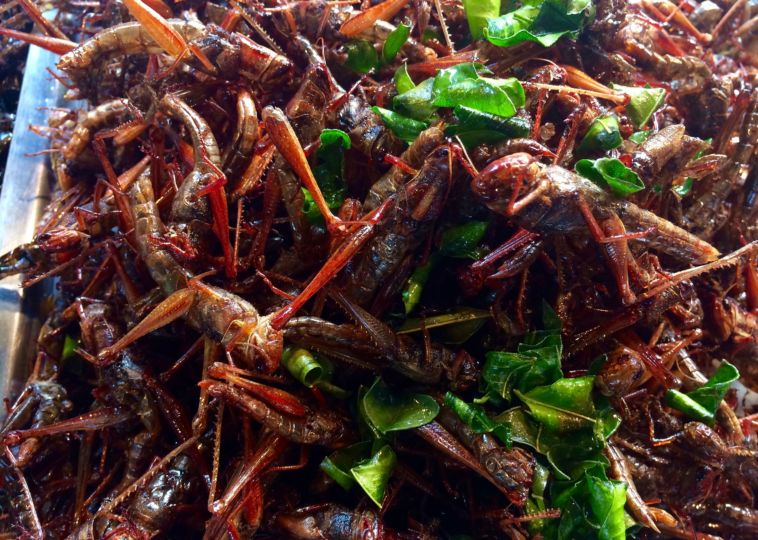 Fried grasshopper sales are mainly found in parts of the world, especially in Asia and Mexico. Grasshoppers are rich sources of protein. You can find roasted grasshoppers in the streets of Asian countries. In Mexican streets, people used to roast grasshoppers with cool pastes, garlic, and lime, to get them from street sides at low cost.

Grasshoppers are loaded with protein and are a popular delicacy in many parts of the world. In Asia, they are fried and sold at street markets, while in Mexico, a type called chapulines is often served with lime and garlic. A sizeable old grasshopper seasoned with salt, pepper powder and chili and fried in a large wok. 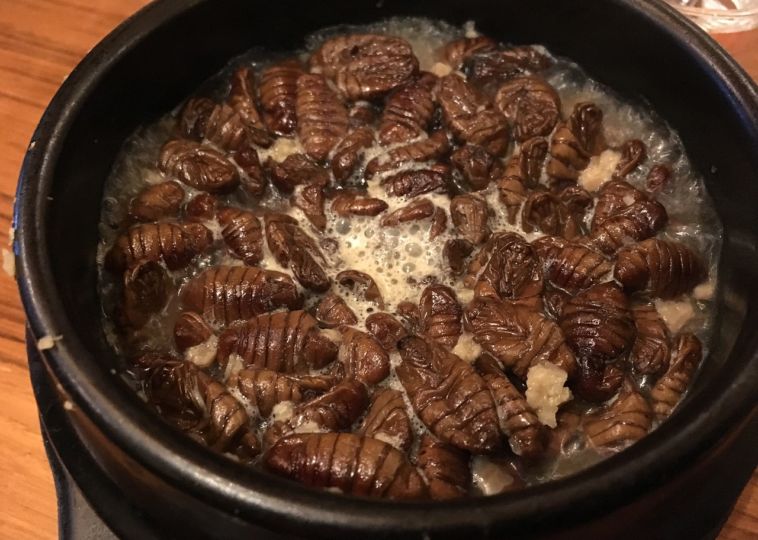 Beondegi is the silkworm pura, it can be found as a fried food on both the small and the broad market in Korea. Koreans used to add Beondegi sugar and soy sauce as additional ingredients. Since this pupa grows inside the tree, it tastes like parts of a tree.

It is available on the Korean market at a low cost, high in protein at the same time. Simply cooked or steamed and lightly seasoned, this is a popular snack throughout Korea and is usually sold by street vendors. Silkworms have been used for many generations for their unique silk threading. 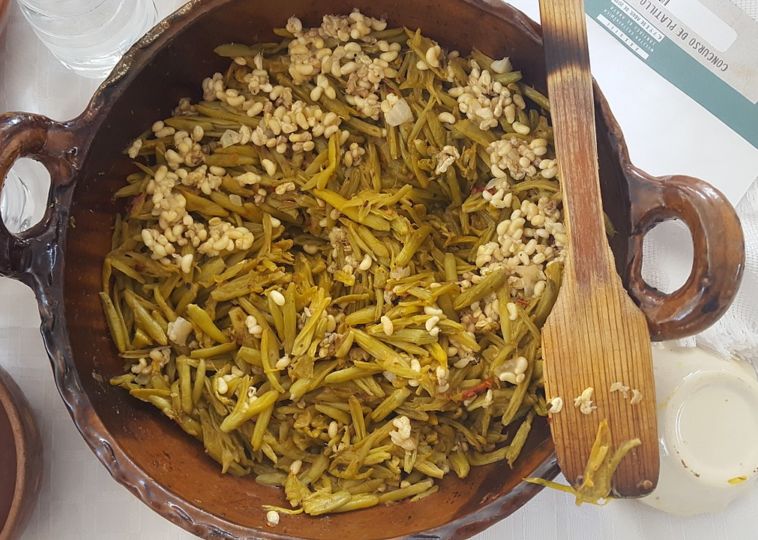 Escamoles are a species of ant larvae found as a rich nutrient food in central Mexico. These small egg-shaped larvae are harvested from maguey plants. In Mexico, escamoles fried alone or cooked with butter and other types, cost a little high. You can also find Escamoles with other Mexican dishes.

This natural ant egg food can get in Mexico all year round. The light-colored eggs, which are harvested from maguey plants, resemble white grain or pine nuts. They have a poppy seed texture, crispier when fried and a slightly nutty taste. 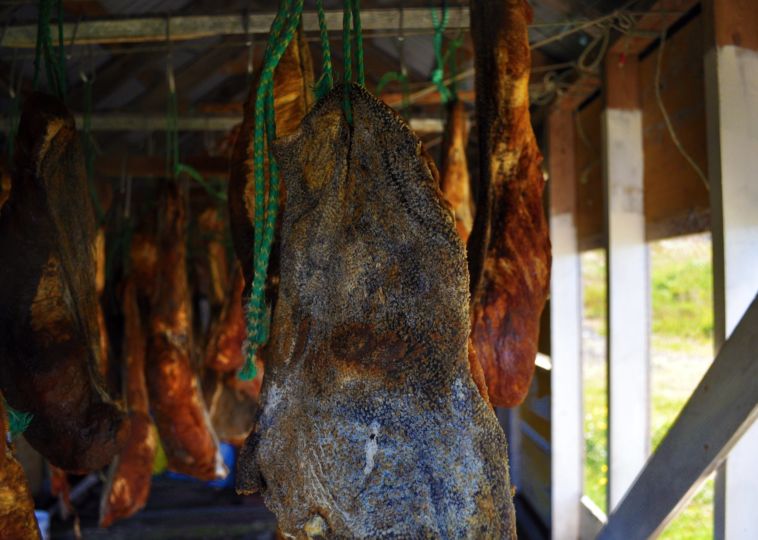 Hakarl is traditional Icelandic cuisine, dried meat from Greenland shark. This strange seafood is served at the Icelandic supermarket all year round,.The fresh meat of Greenland shark cannot eat because it is highly toxic due to the high content of urea.

The rotting carcass of a Greenlandic or sunning, Somniosidae shark, it is buried underground in a shallow pit and pressed with stones so that the toxic internal liquids that allow it to live in such cold water can be drained, making the meat safe to eat. 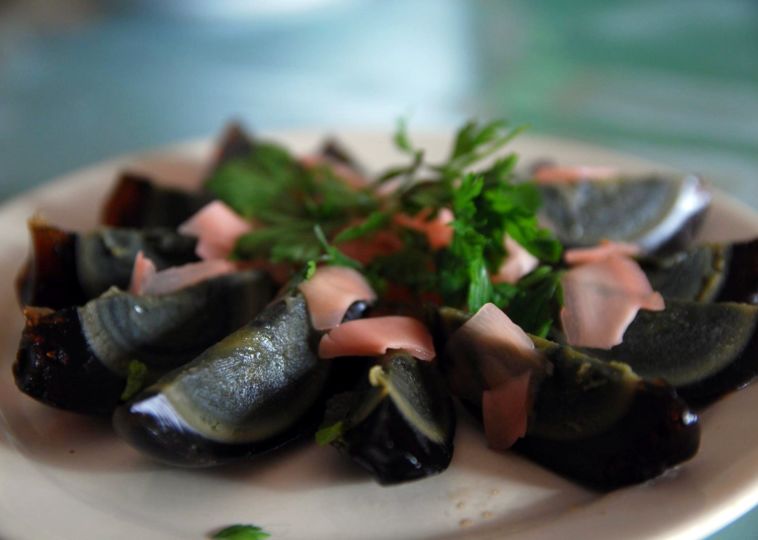 Century eggs are preserved eggs from chickens, ducks and quail, one of the extraordinary strange foods of China. It is called a preserved egg and a centenarian egg. The production of century eggs will take weeks to several months.

After being preserved in a mixture of clay, ash and quicklime for a few months, the egg yolk becomes dark green or even black and slimy, while the white has turned into a dark brown, translucent jelly. It smells strongly of sulfur and ammonia but tastes like a hard-boiled egg. 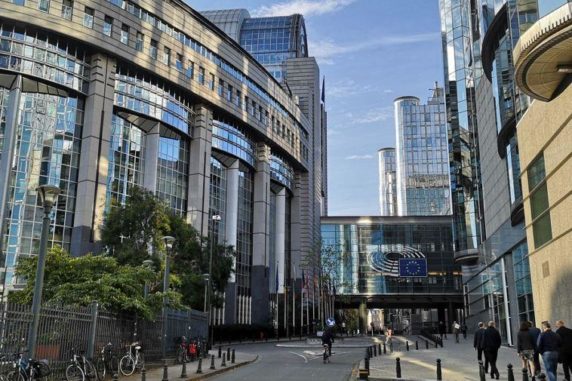